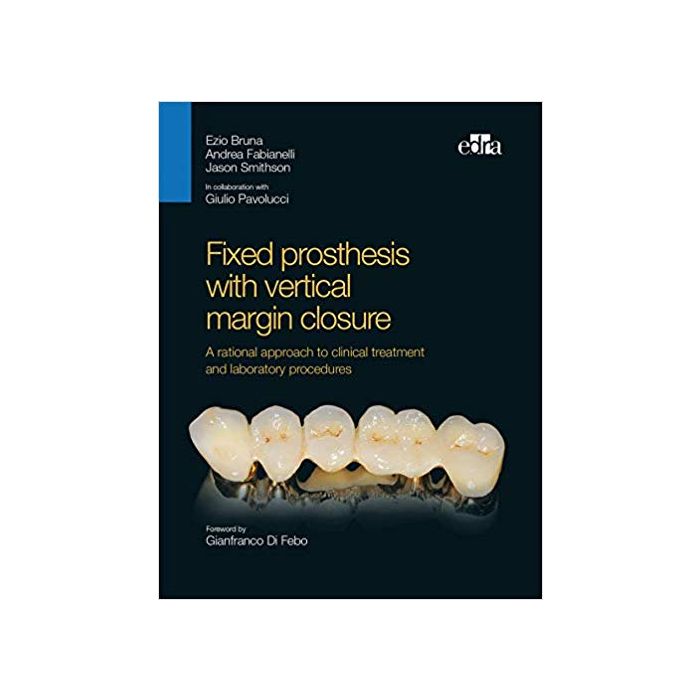 The common idea that edentulism can always be solved with implants is questioned in this book given that the most recent literature highlights the higher risk of implant prosthodontics than traditional conventional toothborne prosthodontics. This books represents a procedural guide to the fabrication of full veneer crowns with vertical margin design. The preparation of the natural tooth as a prosthetic pillar is certainly a traditional procedure that is still one of the most common activities that dentists perform today and the so-called vertical preparation is given full credit in this book.

Authors:
Ezio Bruna
Ezio graduated in Medicine and Surgery from Turin University in 1977: following this he attended a post-graduate course in Dentistry at the same University completing both with honours.
Later, he attended several research centres in European and American Universities, in particular with Professor Eigild Moller at Royal Dental School in Copenhagen and Doctor Robert Lee at Loma Linda University, California.
He has collaborated with the Whipmix Research and Development Centre, designing a new semi-adjustable articulator and an axiographic recorder of condyle movements.
Ezio has published several scientific articles on the use of materials relating to fixed prosthodontics and on occlusal problems. He was the Italian translator of Science of Dental Materials by Ralph Phillips, Evaluation, Diagnosis and Treatment of Occlusal Problems by Peter Dawson and all of the manuals by Robert Lee.
He is a member of The Academy of Operative Dentistry, The International Academy of Gnathology and The New York Academy of Sciences and a speaker in a great number of courses and national and international conferences.
He maintains a private dental office in Orbassano (Turin).

Jason Smithson
Qualified at the Royal London Hospital in 1995 achieving a number of awards including The Constance Klein Memorial, The Stafford Millar, and The Malcolm Jenkins Scholarships, The American Association of Endodontics Prize and the Overall Award for Clinical Dentistry. After spending 3 years in oral surgery residency in London and a further year practicing restorative dentistry in London""s Harley Street Medical District, he relocated to Cornwall in the extreme southwest of England. Jason practices at Pure Dental Health and Wellbeing, Cornwall, UK where his main focus is microscope enhanced adhesive dentistry. His specific interest is direct composite resin artistry and minimally invasive all ceramic restorations and he has presented to dentists locally, nationally and internationally (USA, Canada, Australia, New Zealand and Europe) on this topic. He is a Post-Graduate Clinical Lecturer in both the Cornwall & Isles of Scilly and Plymouth Foundation Dental Practitioners Schemes. He has given hands on programs in the UK, Europe, Asia, Canada and USA on behalf of GC, Ivoclar, Kerr, Hereaus, Optident, Micerium, Carl Zeiss, Global, Velopex and Triodent. He is a UK "Opinion Leader" for Cosmedent (Enlighten Smiles), A European "Key Opinion Leader" for Hereaus-Kulzer and is a member of the European Restorative Advisory Board for GC Europe. Jason is Resident Faculty at The Centre for Esthetic Excellence, Chicago, USA. He is an Accredited International Trainer for Carl Zeiss Dental Academy. Jason has achieved Diplomat Status in Restorative Dentistry from the Royal College of Surgeons (England). He is on the Editorial Board of The Russian Journal of Esthetic Dentistry and has published numerous articles on adhesive and aesthetic dentistry in both the UK and abroad.